, /PRNewswire/ -- Kimberly-Clark today switched on one of largest solar energy installations at its manufacturing facility in Tuas, which produces Huggies diapers and Huggies baby wipes. The 7,730 photovoltaic panels mounted on its roof will generate 3.5 Gigawatt hours of clean energy, enough to power up a thousand 3-bedroom HDB flats for a year. 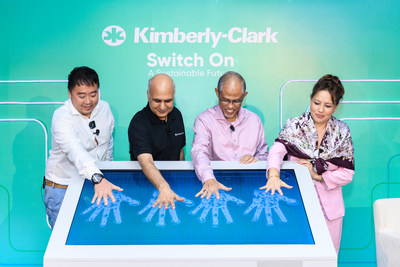 With this investment, renewable energy will now replace 15% of conventional energy use at the plant, reducing greenhouse gas emissions (GHGs) by approximately 1,600 metric tons per year. This is equivalent to removing nearly 350 passenger cars from roads annually.

Tuas plant has a long track record of reducing its environmental footprint. In 2016, it launched an in-house wastewater treatment plant that recycles 75% of the water used in its wet wipes production.

Since 2017, it has partnered with polytechnic researchers to find utility for material waste generated during its production process, as part of its broader efforts to re-use or recycle 100% of its waste.

At a ceremony held to inaugurate its solar roof, , President, Kimberly-Clark Asia Pacific, said, "Our manufacturing operations in have long been recognized as a leader in environmental protection. Switching on this solar roof marks a new milestone in our sustainability journey and accelerates our progress towards our goal of achieving a 20% reduction in GHG emissions globally, by 2022."

Through continued investments in climate and energy programs at its operations around the world, has embarked on a long-term effort to minimize climate change impact from its operations and at the same time transform its financial performance.

Mr. Masagos Zulkifli, Minister for the Environment and Water Resources, was the guest of honour at the inauguration. He said, "I am glad to see enterprises such as step up efforts to adopt renewable energy. Sustainable development is not just central to the mitigation of climate change and protection of the environment. When thoughtfully incorporated, it can benefit business operations and reduce costs in the long run."

The solar roof panels were installed in partnership with -based solar energy provider Sunseap, which has played an instrumental role in the development of many grid-connected PV systems, pioneering the solar energy movement in .

"We are pleased to work with in their efforts to go green. As the leading integrated clean energy solutions provider in , we encourage all companies to look for ways to be environmentally friendly in their business. There are various measures companies can take to reduce their carbon footprint including tapping renewable energy for their operations and going paperless in their day-to-day work," said Frank Phuan, CEO and Executive Director, .

About
(NYSE: KMB) and its trusted brands are an indispensable part of life for people in more than 175 countries. Fueled by ingenuity, creativity, and an understanding of people's most essential needs, we create products that help individuals experience more of what's important to them. Our portfolio of brands, including Huggies, Kleenex, Scott, Kotex, Cottonelle, Poise, Depend, Andrex, Pull-Ups, GoodNites, Intimus, Neve, Plenitud, Viva and WypAll, hold the or No. 2 share position in 80 countries. We use sustainable practices that support a healthy planet, build stronger communities, and ensure our business thrives for decades to come. To keep up with the latest news and to learn more about the company's 147-year history of innovation, visit kimberly-clark.com or follow us on  or Twitter.